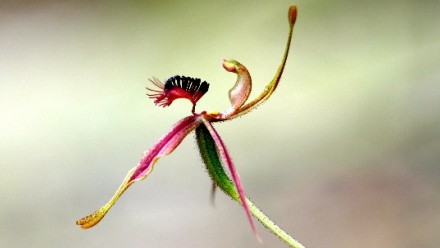 Orchids are well known for their large number of species (>25000) and their diverse animal pollination mechanisms. Perhaps one of the most intriguing of all orchid pollination strategies is sexual deception (SD), by which orchids lure their specific male insect pollinators to their flower by emitting “semiochemical” volatiles that mimic the female sex pheromone. Although a combination of olfactory, visual and tactile mimicry may be essential to achieve pollination, long-range attraction, pollinator specificity and reproductive isolation is typically achieved via floral odours. While sexual deception is found on four continents and is believed to have multiple independent evolutionary origins, Australia is a world centre with several hundred terrestrial orchid species across multiple genera.
Species identification in orchids is often problematic, but this problem is particularly acute in sexually deceptive orchids. In this group, where floral odours alone may define species boundaries, morphological characters are often absent and cryptic species are frequent. Furthermore, variation in floral morphology could be entirely misleading. For example, in a recent extreme case we have confirmed pollinator sharing among unrelated sexually deceptive orchids (Drakaea versus Caladenia) with very different floral morphologies. Such a case suggests that the often minor morphological differences that have been used to define taxa, may be poorly correlated with species boundaries. Consequently, in the absence of pollinator and chemical knowledge, traditional morphological treatments of sexually deceptive orchids may well lead to incorrect taxonomic decisions.
Emerging evidence from CSIRO research on Caladenia orchids suggests that taxonomic over-splitting may be extreme. For example, by employing a combination of pollinator and genetic analysis of the Caladenia reticulata species complex it appears that a single biological species has been incorrectly split into multiple taxa. Furthermore, some of these taxa have subsequently been listed as rare and threatened species. This finding has important conservation and policy implications because the current listing process for new orchid species appears to be undermined by a lack of scientific verification of species descriptions. Given the restricted amount of money and resources currently available for orchid conservation it is critical to ensure that any currently listed orchid taxa represent genuine species. Thus, methods for improving the delimitation of orchid species are crucial.
The goal of this project is to evaluate the power of Genotype by Sequencing (GSB) for aiding the delimitation of species boundaries in sexually deceptive orchids. We will include samples for which prior genetic analysis has been undertaken (microsatellites), enabling us to compare the power of established techniques with GBS. Even more importantly, for a subset of samples we have already defined species boundaries based on knowledge of the floral chemistry that controls pollinator specificity. Thus, collectively our sampling design will provide an unprecedented opportunity to objectively evaluate the power of GBS to delimit species boundaries among closely related incipient species. Finally, because we include examples of listed rare and threatened taxa, our findings will have immediate conservation implications.
Our experimental design will target both Chiloglottis and Caladenia, two distantly related Australian orchid taxa that have particularly well developed sexually deceptive pollination strategies, drawing on samples already collected and extracted for DNA. Approximately 250 samples of Chiloglottis will be included, representing multiple chemically defined species that range from being morphologically and phylogenetically indistinguishable, to being distinct in all respects, although still closely related. We will also include both sympatric and allopatric taxa, with multiple populations included within each taxon. Approximately 250 Caladenia samples will also be analysed. Most of these will be drawn from within the C. reticulata group, representing multiple described taxa, but likely to only contain four species when based on new pollinator and genetic evidence. Samples from a morphologically distinctive outgroup will also be included.
We will apply the GBS technique in close consultation with Justin Borevitz whose laboratory is presently optimising the procedure for large data sets (approx. 500 samples per run). Following the barcoding of samples the GBS will be run at BRF. This will be followed by initial bioinformatic analysis that will be performed by GDU staff.
Outcomes

We completed a pilot Genotype-by-Sequencing run across 96 samples of orchids spanning multiple genera.

At least in this pilot phase we encountered a high degree of missing, data which somewhat limited the informativeness of the study. For example, within genera the number of SNPs with 70% of the samples had the SNP present was as follows: Chiloglottis=456 SNPs, Drakaea= 239 SNPs, Caladenia = 85 SNPs.

We also found surprisingly little sharing of polymorphic sites across species and closely related genera, with only 4 SNPs shared across all genera.