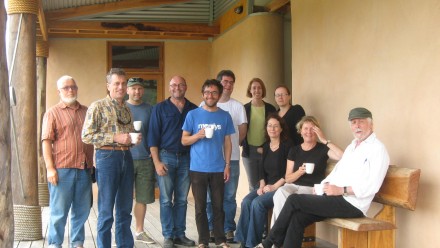 The aim of this project is to bring together key researchers in the area of palaeoecology (Flora and Fauna) in an intensive workshop forum for four days (at ANU’s Kioloa Coastal Campus 17-21 Nov 2013) to:

The key issue addressed by this group will be related to the contribution that palaeoecology can make to the problem of "What is causing the expansion of woody vegetation across northern Australia during the second half of the 20th century?". Current hypotheses include:

The workshop will give people time to collate and analyse pollen and charcoal data from sites across northern Australia (~35 sites) with surface (post 1950 AD when savanna thickening emerges as an issue), early European (1780-1940 AD, transition phase?) and pre-European (~ 1000-200 yr BP) levels that could then be analysed for range of variability in these different periods and the direction of change reflected in the pollen data across the region. Climate modeling (Dr Williams, CSIRO) and species distribution modeling (Dr Rosauer, ANU) will be critical contribution in order to investigate the role of climate, fire and CO2 in past and present species distribution in northern Australia. Prof Mark Bush, has analysed a dataset similar to this from the Andean tree line, where he looked at the direction of boundary migration due to a range of potential drivers (including increased temperature). By the end of the workshop we aim to have a database of northern Australian palaeoecological sites and a draft paper/report prepared.

The key issue addressed by this group will be related to improving the database for prehistoric defaunation in the tropics (Asia-Pacific and Australia) using the review of Corlett 2012 as a springboard for refining our understanding of the impact of defaunation on the environment and society through time. Richard Corlett will be visiting ANU at the time of this workshop and will be involved in leading the data compilation and prospects for future analysis of this data (exploring inputs from phylogenetics and palaeoclimate).

* The proposed paper from the workshop has been published: Louys, et al. 2014. Rewilding the tropics, and other conservation translocations strategies in the tropical Asia-Pacific region. Ecology and Evolution 4(22): 4380– 4398 doi: 10.1002/ece3.1287. Download paper here.
Climate change and adaptation
Conservation zone planning