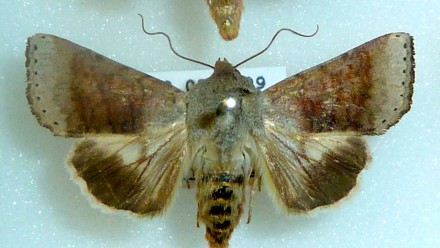 These pest species are all highly polyphagous (more than 200 different host plants recorded for the Australian H. punctigera), migratory, and have developed resistance to a wide variety of insecticides.

In contrast, other closely related species within the genus have a much more limited host plant range and geographical distribution. This makes Helicoverpa an ideal group to study the evolution of polyphagy, insecticide resistance and other traits of pest species.

An important question is whether the suite of characteristics found in the pest species evolved once or many times, suggesting a set of pre-adaptations found in this genus. A robust phylogenetic framework is needed for such evolutionary ecological studies.

However, our best phylogenetic estimate for this important group of moths is only based on three gene fragments (2.6kbp in total) derived for seven of the 21 named species (Cho et al. 2008).

Taxon sampling in most studies is very limited, as most species are very rarely collected or even considered extinct (i.e., H. confusa), and only dried, pinned specimens in museum collections are available for study. While transcriptome data and / or draft genomes have been generated for all pest Helicoverpa by CSIRO and colleagues, no molecular data are available for the majority of species in the genus.

This project aims at establishing a foundation for closing the gap in genomic resources between the pest and non-pest species of Helicoverpa.

We will combine the complementary expertise of the collaborators to adapt existing methods for next generation sequencing to develop universal protocols for the sequencing of partial genomes from old insect specimens in museum collections.

Specimens in Australian National Insect Collection (D. Yeates, CSIRO) of the very rarely collected Australian H. prepodes will be used for a case study, in combination with samples of H. armigera as positive control. Old, fragmented DNA will be extracted and processed in the laboratory of Alexander Mikheyev (Okinawa Institute of Science and Technology), who has experience in working with degraded DNA.

Library building and multiplexing will draw on the cost-efficient techniques developed (C. Moritz's lab, ANU). The resulting genome data will be assembled against unpublished genomes of H. armigera and H. punctigera (K. Gordon, CSIRO) and analysed by A. Zwick (CSIRO) and A. Mikheyev, utilising the large computational resources of CSIRO.

This study will provide platform capability to address the extraction and sequencing of DNA from pinned material throughout ANIC, bringing a suite of other scientific questions into scope.

The results will also provide the phylogenetic framework for comparative genomics to investigate the evolution of polyphagy. A further study would utilise the sequencing techniques to screen museum specimens that were collected prior to the advent of insecticides for the presence of resistance genes or potential precursors (T. Walsh, CSIRO).

This project will contribute to conservation planning and threatened species management via the development of generally applicable techniques for deriving genetic information from museum specimens for species delimitation (cryptic species) and phylogenetics. This would open up a vast, so far hardly utilised, resource that permits sampling of past or even extinct populations of species.

Finally, this study will contribute to invasive species and biosecurity policy and planning by providing an evolutionary framework for the interpretation of existing data for the mega-pest-group Helicoverpa.