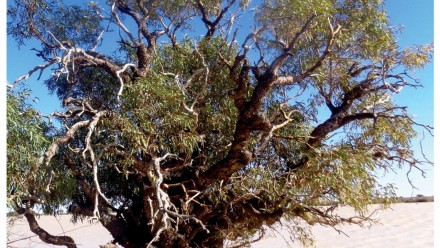 Dryland river systems within the Lake Eyre Basin (LEB) represent some of the few remaining naturally functioning, unregulated desert river systems globally. Given their natural, unregulated, hydrological regimes, these rivers provide critical reference systems against which to compare highly regulated systems such as those of the Murray Darling Basin. The Lake Eyre Basin therefore provides unique and valuable insights into the nature and impact of hydrological dysfunction and possible restorative actions. The associated biodiversity values of these dryland river systems are driven by the naturally functioning hydrology of the system.

Coolibah life history, particularly expressed by the synchronous timing of reproductive phenology with a higher incidence of summer flooding events, is dependent on the river system’s naturally functioning hydrological regime. Coolibah fruit matures rapidly and the resulting seed is promptly shed for wide dispersal during major flooding events, both longitudinally down the system and laterally across the adjacent floodplain, a process known as hydrochory. As a result, major recruitment events of Coolibah are highly dependent upon major, uncommon, extensive flood events over a sequence of years.

Throughout the study area (LEB), clusters of an assortment of Coolibah cohorts are visible in the landscape, marking the outer edge of historical floods, which have reached to varying extent across the adjacent floodplains. Recent results have revealed that the most apparently conspicuous of these cohorts, as revealed by 14C dating is contemporaneous with the major flooding events of the 1970’s. Cohorts such as these manifest physically as ‘flood fingerprints’ structuring the landscape; records of floods past.

There is a dearth of material in the literature relating to the patterns and driving processes associated with the recruitment and distribution of Coolibah at a landscape level let alone the influences structuring genetic variability. An obvious potential outcome of the process of hydrochory would be the impact upon Coolibah gene flow and associated genetic diversity both temporally and spatially. It is possible that, in contrast to typical landscape genetic patterns where relatedness increases with proximity, Coolibah relatedness may be more associated with individuals’ age than proximity.

During a recent autecological investigation of Coolibah, Eucalyptus coolabah (Gillen 2017) a collaboration was developed between the ANU and the CSIRO Australian Tree Seed Centre (ATSC). This project represents the opportunity both to develop and expand upon this collaboration.

While undertaking field work, Coolibah seed from across the range of the Lake Eyre Basin (LEB) was collected for the ATSC seed bank. Prior to storage at the ATSC a sub-sample of deposited seed from all seed sources was subjected to a mandatory viability analysis. The ATSC generously supplied seed collecting materials as well as equipment for the collection of tree cores for valuable radiocarbon dating as below. During this autecological investigation, Coolibah leaf material was collected opportunistically and systematically with the intent of future genomic analyses should funds be available.

An initial insight into the landscape genomics of Coolibah, in addition to progressing autecological knowledge of the species, would also provide the ATSC with valuable information regarding genetic variability in relation to seed provenance. Future collaborative work envisaged is the identification of genetic markers under selection; an insight into adaptation to a range of environmental factors such as salinity and flooding regimes.

On a larger scale, we are optimistic of using the data generated in this study to seed a larger multidisciplinary investigation in to landscape / continent wide spatial patterning, linking landscape and genetic data for Coolibah.

It is envisaged that the findings from this Ignition proposal would be integrated into this multidisciplinary investigation which would incorporate an expansion of radiocarbon dating work to develop a greater understanding of Coolibah population dynamics and demography.

It is intended that this Ignition Grant will undertake preliminary genomic / SNP analysis of 400 Coolibah samples using Genotyping-By-Sequencing (GBS) to test the above proposal.

In addition, we aim to provide insight into: