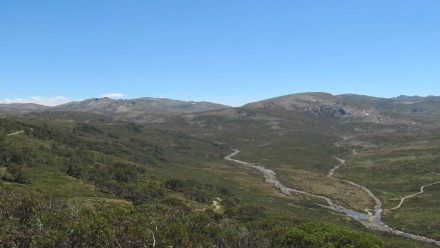 The billy button genus Craspedia comprises about 20 species of mostly perennial rosette plants found all states of Australia except the Northern Territory and at least another 6 species in New Zealand. Its centre of diversity is the Australian Alps where it defines, together with the snow daisies (Celmisia), the appearance of the alpine landscape in summer. Several species of Craspedia are narrow local endemics, have fragmented populations and/or are considered to be vulnerable to climate change.
Many species are morphologically plastic and difficult to identify, and previous attempts at inferring their phylogenetic history with Sanger sequencing data have met with limited success due to low sequence divergence and non-monophyly of sequence copies within species. In addition, Craspedia is known to form a polyploid complex with observed ploidy levels ranging from diploid to decaploid, and many species are suspected of hybridizing with each other. This suggests the possibility of reticulate evolution through allopolyploidy.
Craspedia is thus of major research interest due to its status as an iconic plant of the Australian Alps, containing several vulnerable or threatened species, and constituting an Australian model for the study of reticulate evolution, polyploid speciation and adaptation to alpine habitats. The proposed study aims to elucidate the overall evolutionary history of the genus to provide a framework that will guide subsequent studies into speciation processes and conservation genetics.
Aims of the project:
The results of the present project will provide a framework within which additional questions can be addressed. Once a well-resolved phylogeny is available, character evolution, the biogeographic history of Craspedia and patterns of phylogenetic diversity and phylogenetic endemism across the landscape can be studied. Identifying pairs of sister species and, if they exist, allopolyploids and their putative parents will make it possible to understand speciation processes and niche shifts within the genus. The data can also be expanded by additional samples, e.g. with a focus on Tasmanian species after further targeted sampling in the future. Finally, depending on the patterns seen in problematic species represented with samples from multiple populations, future taxonomic or conservation genetic studies may readily suggest themselves.
Understanding the phylogenetic history of Craspedia and the evolutionary processes taking place within the genus would be desirable to provide a framework within which questions of relevance to conservation can be addressed and the potential impact of future climate change can be assessed. In addition, the proper taxonomic status of several forms of Craspedia is unclear, with up to five potentially undescribed species but also some cases of unclear delimitation of currently accepted species (e.g. “vulnerable” C. adenophora). This means that it is also not yet entirely clear what entities exist that need to be protected. The project is thus relevant for conservation planning and, because several species of Craspedia have a fragmented and localized occurrence and/or are vulnerable to climate change, for the protection of threatened species.
Outcomes:
Conservation zone planning
Threatened species