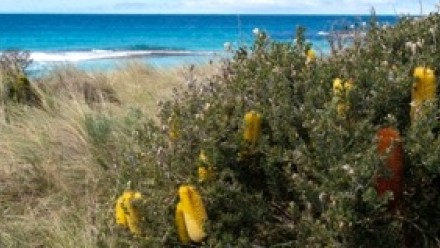 Which lineages are most likely to survive rapidly changing environments? Previous approaches to understanding plant responses to changing conditions have focused on specific biochemical/physiological stress responses, investigating the genetic basis of adaptive traits, and incorporating evolutionary processes to evaluate the viability of specific lineages.

Here we propose a new macroevolutionary approach, using species and environmental data from the Atlas of Living Australia (ALA) to infer species tolerance to harsh environmental conditions.

Macroevolutionary approaches can reveal general patterns of tolerance that may allow us predict how the whole plant communities will respond to future environmental changes rather than being restricted to well-studied case studies with detailed information on mechanisms of stress tolerance.

This project is designed as a proof-of-concept for the macroevolutionary approach to understanding the lability of stress tolerance in plants. This will be a novel combination of environmental niche modelling and phylogenetic analysis to identify species with single and multiple stress tolerances.
We have successfully used ALA distribution data to predict salinity and alkalinity tolerance in Australian grasses (Annals of Botany 2014), despite the challenges of limited phylogenetic resolution, and the challenges of inferring salinity that can vary over very short scales.
This project will develop a more detailed test to account for sampling bias and spatial and phylogenetic autocorrelation.  Here we will use Banksia and Hakea as exemplars to develop the methods, building on recently completed species-level phylogenies of these genera. We will focus on environmental conditions including soils, temperature and rainfall patterns as a foundation for developing these methods.
We aim to use:
Firstly, we will use point occurrence data for each target species to derive the range of conditions under which a given species is found. We will account for the influence of sampling effort and spatial autocorrelation on our inference of species ecology by using target group occurrences to construct a model of sampling efficiency in response to variables that could influence sampling probability (e.g. proximity to roads or population centres, management status of land). This will allow us to construct spatial estimates of sampling bias to weight occurrence data. With these weighted occurrence data, we will derive a distribution of conditions for each ecological variable for each taxon.
Secondly, we will assemble the distributions for each variable for all the taxa in the clade, with correction for phylogenetic autocorrelation. We use these distributions within each clade to set a threshold level and define tolerators as those species that have a significant part of their distribution above the threshold level, for example taxa with x% of their occurrences occurring in the top y% of the range of conditions for that clade. We will resolve the threshold analytically to minimize the probabilities of failing to identify a known tolerant or incorrectly including a known sensitive taxon. We can evaluate alternative criteria for optimizing the tradeoff between sensitivity and specificity in order to select useful thresholds for determining tolerant versus sensitive species.
This approach allows us to use incomplete lists of tolerant taxa as a training dataset to set the appropriate sensitivity levels for the identification of likely tolerant taxa from their distribution data alone. This phylospatial approach explicitly allows us to incorporate flexibility in the definition of environmental tolerators in order to seek ecologically meaningful definitions that highlight critical limits to distribution.
Finally, we examine how taxa behave at the extremes of the clade tolerance range using the taxon-based distributions for each ecological variable. For example, if tolerance to particular stresses involves significant physiological investment, or requires tradeoffs among traits, then increases in tolerance may become unsustainable at high levels. Upper limits to tolerance levels may be reflected in taxon-specific tolerance distributions becoming more skewed as they approach the limits of the clade distribution. Such a pattern may indicate that the clade has little capacity to increase tolerance beyond its current range, potentially making taxa vulnerable if conditions become harsher.
If skewness is correlated with the mean of the distribution, we can describe adaptation to stress as a correlated Bernoulli process in order to account for the fact that future adaptation potential depends on the current trait value. Then we normalize the skewed distributions by the limit theorems for a correlated Bernoulli process. In this way, we can detect the potential for tolerance shifting, where a clade seems to have the potential to increase its tolerance range by exploiting common variation, or identify cases where a clade seems to have reached an upper bound on climatic or edaphic conditions, suggesting it may be limited in its capacity to respond to a shift in conditions beyond current limits.
Project outcomes will include:

A major benefit of this project will be in demonstrating and extending the use of the publicly available ALA database for investigating both theoretical issues in macroevolution and macroecology, and practical issues concerning the capacity of species to adapt to changing climate.

We will release any software developed for other researchers to use, and make all data analysed openly accessible for the purposes of verification and for the conduct of future research by others.

Any new spatial layer can be released through Atlas of Living Australia, contributing to this valuable public resource which can be accessed by anyone interested in patterns of Australian biodiversity, whether at the scale of single species or broad scale.