How local is local? Landscape genomics in Yellow box 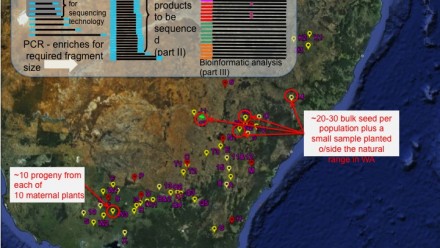 Eucalypts are an important and ubiquitous part of many Australian ecosystems. But agricultural expansion following European settlement has seen millions of hectares of eucalypt communities cleared or converted. One such community is Box-Gum Grassy Woodland (BGGW) that once covered millions of hectares in south-eastern Australia. Land clearing and changes in land use has seen it decline to ~10 percent of its pre-European distribution and it is now nationally listed as critically endangered. Yellow box (Eucalyptus melliodora) is one of the dominant trees in BGGW and an iconic tree in the Australian landscape. It is highly valued for timber and honey production as well as its tolerance to a range of soils, waterlogging, salinity and providing stock shade and shelter.

The restoration of BGGW is a high priority for land management agencies, non-government organisations and landowners across south-eastern Australia. Collecting seed, growing and re-planting Yellow box is fundamental to these restoration projects. However, little is known of the genetic implications or the levels of adaptability present in any key restoration species, including Yellow box, that are frequently used for broad-scale restoration across Australia. Yet, understanding the scale and potential impact of seed movement is critical for restoring native vegetation that is adaptable and resilient to future environmental challenges. Consequently, land managers lack critical information to make valued judgements regarding where to source Yellow box seed for their restoration projects.

This project will genotype Yellow box by sequencing (PST1 GBS) 96 individuals sourced from dozens of regional Canberra sites to identify within and between population diversity. This will give us fine-grain information about population structure and gene flow across the landscape. It will answer 'how local is local?' using denovo sequence variation at tens of thousands of sites. This information will allow future studies on thousands of individuals from hundreds of locations across the species range to be designed in order to map the genotypes that show associations with climate and other landscape variables such as soil types and hydrology. These associations will allow the definition of appropriate regional population seeds pools that have large effective genetic diversity that matches current and future climate envelopes for Yellow box.