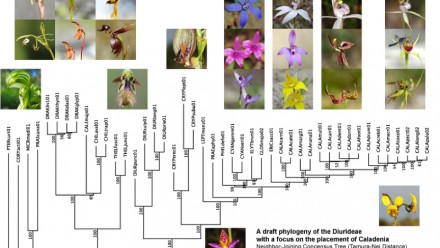 Among Australia’s orchids, the highest species diversity is found within the terrestrial tribe Diurideae, which accounts for more than 60% of Australia’s orchid diversity. Australia is the centre of diversity of this Australasian orchid group and several of its nine major lineages, such as Prasophyllinae, Caladeninae and Thelymitrinae underwent a presumably relatively recent and rapid diversification on the continent.

Diurideae also display interesting biogeographic patterns with similar major disjunctions in several of its lineages, for example between southwest and southeast Australia and North Australia, and between Australia, New Zealand, New Caledonia, and several Pacific islands.

This renders Diurideae an excellent group to study spatio-temporal diversification dynamics of a major Australasian plant group to understand the factors that have contributed to its evolutionary success.

This project proposes to develop an exome capture system that can be applied broadly across the tribe Diurideae to unravel phylogenetic relationships across different divergence levels within the tribe. We will take advantage of the transcriptomes being generated at ANU and NTH for different purposes (e.g. floral volatile candidate gene discovery at ANU), with the goal to target at least several hundred single copy nuclear markers.

To achieve this aim, the ANU and CSIRO teams will join forces by combining their respective transcriptome data for different Diurideae groups, develop the exome capture system and to run a NGS pilot study. The ANU team has already generated substantial transcriptome data (23 species) with focus on Caladeniinae and Drakeainae, and the CSIRO group will complement this data set by generating 12 transcriptomes to represent all major Diurideae lineages.

The development of suitable nuclear markers is a substantial part of this Ignition grant project and requires substantial bioinformatic support, which will be conducted in RP’s lab group at ANU. The markers will be developed for an in-solution capture method (MyBaits), and will be designed to also suit degraded material to allow for the inclusion of herbarium material from rare or highly endangered species.

The other component of this project is to run a pilot study with 24 samples on a Illumina MiSeq to test the efficiency of the exome capture system and the phylogenetic signal of the generated data at different taxonomic levels.

The planned phylogenetic studies based on the markers developed will test hypotheses of past diversification dynamics in this major Australian orchid group, including the relationship between climatic changes and shifts in diversification rates and environmental niches. Thus, these results will be important for predicting the impacts of future climate change.

The generated markers will also provide insights into their phylogenetic relationships and the level of genetic divergence between and within species species, informing the assessment of their taxonomic status and underpinning evidence-based conservation strategies.

This project is intended to form the basis of a future joint grant application from the CSIRO-ANU team to study the spatio-temporal diversification dynamics and the evolution of Diurideae.

This project was successfully completed in 2017. Activities included: