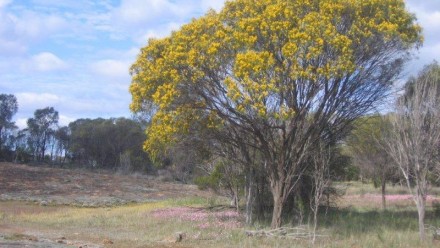 Microbial species that live in the soil are an extremely important group of organisms whose activities underlie many ecosystem services, including nutrient cycling, decomposition, and reciprocal interactions with plants, which form the base of the food web in all terrestrial systems.

Despite their prevalent and important role, little is understood about how contemporary environmental forces shape the distribution, function and diversity of soil microbes across landscapes and even less is known about the impending impacts of climate change on soil microbes.

A prominent challenge with associating climate with microbial data collected from soils distributed across an environmentally heterogeneous landscape is disentangling the effects of direct and indirect environmental factors.

Plant communities are important in structuring microbial communities, thus associations between climate and microbe communities could be an indirect consequence of changing plant composition, since environmental factors are well known to affect plant distributions and assemblages. This adds noise and confounding variation, decreasing our power to detect true effects of climate variation on microbes.

Furthermore, given the potential rapid turnover of microbial communities due to their short life-histories, we currently lack an effective approach to analytically combine decades of high resolution climate data with microbe distribution data that is often collected across highly patchy landscapes in a single time-point.

In order to maximize our ability detect associations between climate and soil microbe data, we propose to analyse the environmental factors that predict distribution and diversity of Rhizobia communities associated with a widespread and common Acacia species along a climate gradient in south western Australia, Acacia acuminata.

Rhizobia are a group of symbiotic nitrogen-fixing bacteria, belonging to several large and diverse taxonomic groups and contribute substantially to nitrogen cycling in terrestrial ecosystems. Rhizobia associate with legume plants such as Acacia, which make up a large and important component of Australian plant communities, being diverse and widespread throughout the continent.

By collecting soil samples only from around the base of one tree species, we will minimize micro-environmental noise in the soil caused by differential effects of plant species. Also, by targeting microbial taxa that are well known to form symbiotic associations with legumes, we will be standardizing any potential differential impacts on microbe communities attributed to plant feedback effects.

Acacia acuminata commonly grows across much of the Wheatbelt region of Western Australia and is economically important as the major host-plant for growing Sandalwood in South-western Australia.

Soil samples have been collected from around the base of Acacia acuminata plants across 24 sites sampled along two important climate gradients, temperature and precipitation spread across their range. Sampling was conducted to eliminate site level correlation between rainfall and temperature and spatial autocorrelation in rainfall. Three soil samples were obtained from each site. Several important soil characteristics were measured on each soil sample, including major nutrient concentrations, soil texture, and chemical composition. These, along with climatic variables extracted for each site will constitute our potential environmental predictor variables. Rhizobia bacteria isolates have been obtained from each soil sample.

This has been part of a CSIRO OCE postdoc project by Simonsen and Prober. They have allocated all current CSIRO funds to conduct whole genome sequencing on a subset of one taxonomic rhizobia group to examine intraspecific genetic variation in a landscape population genomics project. However, in the process of isolating one taxon group from the soil, other groups will be cultured using the same sampling methods, which could provide valuable additional data on interspecific diversity of rhizobia in South-Western Australia. CBA funding will allow us to measure interspecific diversity for a separate but parallel project. For this project, cultured bacteria isolates from all groups of Rhizobia will be pooled by soil sample and sent for sequencing using whole community 16S amplicon sequencing.

The sequence data will be analysed to determine the community composition of the 24 sites. All sequences will be placed onto a large phylogeny constructed using reference sequences downloaded from public databases. In this way we can assign each strain to a major Rhizobia lineage, and conduct both taxonomic and phylogenetic composition analyses.

The major statistical analysis will be to fit models explaining the presence or absence of individual Rhizobia lineages across the sampling sites, using environmental factors as predictors and rigorously exploring temporal scales of climate data that best fit the data. Additionally we will fit models that attempt to explain the overall taxonomic and phylogenetic diversity of Rhizobia using the same environmental factors.

Ultimately we will be able to identify the factors most important to determining the distribution of Rhizobia that associate with Acacia acuminata in Western Australia, and be able to make predictions about what Rhizobia will be found in unsampled locations, as well as what changes in Rhizobia communities we may see as a result of a changing climate.

The results of this study could be expanded by collecting data on the relative effectiveness of each strain as a symbiotic partner for Acacia acuminata. By combining data on the environmental factors effecting Rhizobia strain presence, their relative positive effects on Acacia, and data on the distribution of A. acuminata, it should be possible to make a predictive model of A. acuminata that incorporates both the direct effect of abiotic environment on Acacia, as well as its indirect effect through Acacia’s most important biotic interaction. Such a model would give the best possible understanding of how climate change is likely to effect this important Australian species into the future.

The main finding was that we discovered an interesting (and not initially expected) relationship between the size of an Acacia tree and the diversity of rhizobia bacteria in the soil surrounding it, that is not accounted for by climate factors. We suspect it has to do with the tree's age, and we are exploring several hypotheses to explain it (e.g. island biogeography, niche construction, etc.).