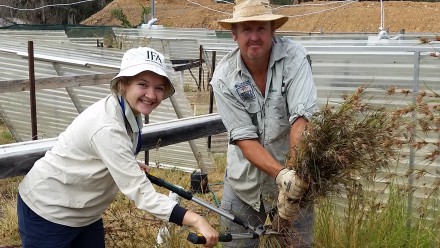 The CBA may provide up to $10,000 for operational expenses and stipends for a honours student enrolled at ANU or University of Canberra with a CSIRO co-supervisor.

In consultation with the CBA Director and Liaison Committee, this initiative may be modified to include external partners other than CSIRO, such as supervisors from Goverment agencies or NGOs.

CBA-funded honours projects will allow students to maintain and develop their university connections and research skills while being exposed to CSIRO research and researchers.

Proposed projects should have a biodiversity science focus (evolutionary biology, population and ecosystem ecology, genomics, bioinformatics, and/or spatial modelling) and allow students genuine engagement across both their university and CSIRO labs.

The student will need to be enrolled, with a primary supervisor, at one of our partner universities (ANU or UC) and be co-supervised by at least one CSIRO researcher. A document that introduces the honours year to potential external co-supervisors can be found above under Downloads.

You may already have a potential student in mind or we can help advertise your proposed project for either the January or mid-year intake of honours students.

Using the template (above under Downloads) send us your potential honours project idea.

Applications will be assessed by the CBA Director and Liaison Committee in terms of the above eligibility criteria.

We would like to recieve a copy of the student's thesis abstract on submission and an expenditure report (a simple spreadsheet is fine). We also expect, if possible, that the student will present the findings of their project in a seminar to the CBA community.

We would also like to know if the project resulted in any publications, future collaborations/ co-supervision, or had any applied outcomes - e.g. management, policy.